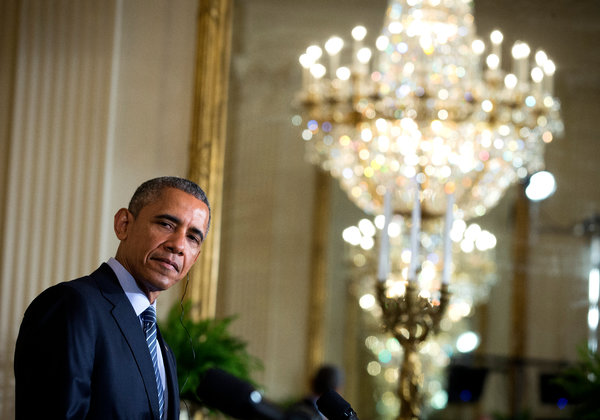 Even though President Obama is expected to commute dozens of sentences,

he will barely make a dent in clemency applications.

WASHINGTON — Sometime in the next few weeks, aides expect President Obama to issue orders freeing dozens of federal prisoners locked up on nonviolent drug offenses. With the stroke of his pen, he will probably commute more sentences at one time than any president has in nearly half a century.

The expansive use of his clemency power is part of a broader effort by Mr. Obama to correct what he sees as the excesses of the past, when politicians eager to be tough on crime threw away the key even for minor criminals. With many Republicans and Democrats now agreeing that the nation went too far, Mr. Obama holds the power to unlock that prison door, especially for young African-American and Hispanic men disproportionately affected.

But even as he exercises authority more assertively than any of his modern predecessors, Mr. Obama has only begun to tackle the problem he has identified. In the next weeks, the total number of commutations for Mr. Obama’s presidency may surpass 80, but more than 30,000 federal inmates have come forward in response to his administration’s call for clemency applications. A cumbersome review process has advanced only a small fraction of them. And just a small fraction of those have reached the president’s desk for a signature.

“I think they honestly want to address some of the people who have been oversentenced in the last 30 years,” said Julie Stewart, the founder and president of Families Against Mandatory Minimums, a group advocating changes in sentencing. “I’m not sure they envisioned that it would be as complicated as it is, but it has become more complicated, whether it needs to be or not, and that’s what has bogged down the process.”

Overhauling the criminal justice system has become a bipartisan venture. Like Mr. Obama, Republicans running for his job are calling for systemic changes. Lawmakers from both parties are collaborating on legislation. And the United States Sentencing Commission has revised guidelines for drug offenders, so far retroactively reducing sentences for more than 9,500 inmates, nearly three-quarters of them black or Hispanic.

The drive to recalibrate the system has brought together groups from across the political spectrum. The Center for American Progress, a liberal advocacy organization with close ties to the White House and Bill and Hillary Rodham Clinton, has teamed up with Koch Industries, the conglomerate owned by the conservative brothers Charles G. and David H. Koch, who finance Republican candidates, to press for reducing prison populations and overhauling sentencing.

“It’s a time when conservatives and liberals and libertarians and lots of different people on the political spectrum” have “come together in order to focus attention on excessive sentences, the costs and the like, and the need to correct some of those excesses,” said Neil Eggleston, the White House counsel who recommends clemency petitions to Mr. Obama. “So I think the president sees the commutations as a piece of that entire process.”

The challenge has been finding a way to use Mr. Obama’s clemency power in the face of bureaucratic and legal hurdles without making a mistake that would be devastating to the effort’s political viability. The White House has not forgotten the legacy of Willie Horton, a convicted murderer who raped a woman while furloughed from prison and became a powerful political symbol that helped doom the presidential candidacy of Gov. Michael S. Dukakis of Massachusetts in 1988.

Deborah Leff, the department’s pardon attorney, has likewise pressed lawyers representing candidates for clemency to hurry up and send more cases her way. “If there is one message I want you to take away today, it’s this: Sooner is better,” she told lawyers in a video seminar obtained by USA Today. “Delaying is not helpful.”

Under the Constitution, the president has the power to grant “pardons for offenses against the United States” or to commute federal sentences. A pardon is an act of presidential forgiveness and wipes away any remaining legal liabilities from a conviction. A commutation reduces a sentence but does not eliminate a conviction or restore civil rights lost as a result of the conviction.

In recent times, attention has focused on presidential pardons because they have become politically controversial, such as Gerald R. Ford’s pardon of Richard M. Nixon, the elder George Bush’s pardons of Iran-contra figures and Bill Clinton’s pardons of the financier Marc Rich and scores of others.

Modern presidents have been far less likely to commute sentences. Lyndon B. Johnson commuted the sentences of 80 convicted criminals in the 1966 fiscal year, and no president since then has matched that in his entire administration, much less in a single year. Ronald Reagan commuted only 13 sentences in eight years in office, while George W. Bush commuted just 11 in the same amount of time. The elder Mr. Bush commuted three sentences in his four years.

Mr. Obama started out much like the others, commuting just one sentence in his first five years in office. But in his first term he signed a law easing sentencing for new inmates by reducing the disparity between crack and powder cocaine, while his attorney general, Eric H. Holder Jr., issued new guidelines to prosecutors to avoid charges requiring excessive prison terms.

In his second term, Mr. Obama embarked on an effort to use clemency and has raised his total commutations to 43, a number he may double this month. The initiative was begun last year by James M. Cole, then the deputy attorney general, who set criteria for who might qualify: generally nonviolent inmates who have served more than 10 years in prison, have behaved well while incarcerated and would not have received as lengthy a sentence under today’s revised rules.

“It’s a touchy situation,” Mr. Cole said in an interview. “You don’t want to just supplant a judge’s determination of sentence.” But after reviewing many clemency petitions, he said, “I’d seen a number of them where the sentences seemed very high for the conduct and it noted that the judge at the time of sentencing thought the sentence was too high. We looked at that and thought this really isn’t supplanting the judge.”

To respond to Mr. Cole’s call, several groups formed a consortium of lawyers to prepare applications for inmates, including the American Bar Association, the American Civil Liberties Union, the National Association of Criminal Defense Lawyers and Ms. Stewart’s advocacy group. The more than 30,000 inmates who applied inundated the effort.

The consortium, called Clemency Project 2014, now has more than 50 law firms, more than 20 law schools and more than 1,500 lawyers participating. But the process is burdensome as the volunteer lawyers try to dig out documents from more than a decade ago to satisfy the criteria. So far, they have screened out 13,000 inmates who did not meet the guidelines and sent just over 50 applications to the Justice Department.

Cynthia W. Roseberry, who left her job as a top federal public defender in Georgia to lead the project, said it took a while to set up a process but it has now been streamlined. “The lawyers will be able to do the analysis a lot quicker and we’ll be able to move them faster,” she said.

Aside from the Clemency Project, the Justice Department has received more than 6,600 applications for commutations since Mr. Cole outlined the criteria, more than twice the rate over a similar period earlier in Mr. Obama’s presidency. Ms. Leff, the pardon attorney, has solicited volunteers from around the department to give a day or more a week to help out, but her office is taxed. The White House has asked Congress to increase funding for the office from $3.9 million this year to $5.9 million next year.

Margaret Love, who served as pardon attorney under the first Mr. Bush and Mr. Clinton and now represents prisoners applying for clemency, said the process had become a mess. “It’s really poor management,” she said. “These are people who don’t have any history with sentence reduction. They’ve been putting people in prison all their lives. They don’t know how to get them out.”

Senator Charles E. Grassley of Iowa, the Republican chairman of the Judiciary Committee, has expressed concern that the Justice Department has essentially outsourced a government function to the Clemency Project 2014. Department officials dispute that, saying the project does the same thing lawyers have always done in helping candidates for clemency prepare applications.

The department noted that it still reviews the cases and makes it own judgments before sending recommendations to the White House. Officials acknowledged that it was slow in starting the effort. “There was a start-up time, but now we’re really in it,” said Emily Pierce, a department spokeswoman. “We feel we’re moving at a good pace.”

In December, Mr. Obama commuted the sentences of eight drug offenders, and in March he followed up with 22 more. If he accepts most of the latest applications sent to the White House, some officials said it would probably double that last batch of 22, exceeding the 36 commutations Mr. Clinton issued at one time on his last day in office.

Among those Mr. Obama granted clemency in March were eight prisoners serving life sentences for crimes like possession with intent to distribute cocaine, growing more than 1,000 marijuana plants or possession of a firearm by a convicted felon.

Mr. Obama signed letters to the recipients explaining that they had demonstrated the potential to turn their lives around. “By doing so, you will affect not only your own life, but those close to you,” he wrote. “You will also influence, through your example, the possibility that others in your circumstances get their own second chance in the future.

“I believe in your ability to prove the doubters wrong,” he added. “So good luck, and Godspeed.”